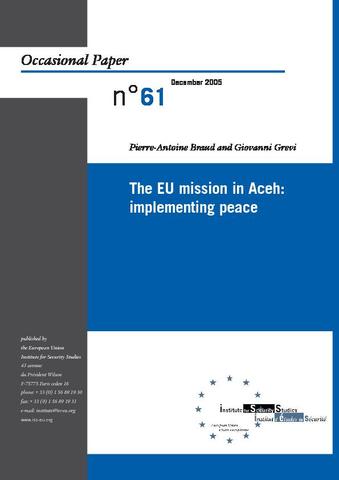 The EU Monitoring Mission in Aceh (AMM), Indonesia, marks a new step on the path of the Union to becoming a global player. Endowed with a robust mandate including monitoring demobilisation, the decommissioning of arms, the withdrawal of government forces, the reintegration of former combatants and the launch of a new political process, this new ESDP mission has so far provided an effective contribution in ending years of fighting and paving the way to sustainable peace. The roots of the conflict date back a long way. In 1976, a separatist movement was created in Aceh. The Free Aceh Movement (Gerakan Aceh Merdeka-GAM), consisting of a couple of hundred combatants, engaged in skirmishes against the security forces until 1979. The army easily defeated it. Among the Acehnese population of four million people, however, resentment towards Jakarta was strong. Economically, the province felt deprived of its resources, which accrued to the central government. Based on Islam and its past history as an independent Sultanate, its strong regional identity was challenged by a highly centralised government. In 1989, GAM resumed its limited military activities. A massive campaign of military repression ensued. In Acehnese society, massive human rights abuses led to growing support for a separatist agenda. Following the fall of the dictatorship in 1998, the role of the military in Indonesian politics began to be challenged. The Acehnese conflict became an instrument in the power struggle between rival factions in Jakarta. The repressive methods of the military were contested wherever the army resorted to them. The changing balance of power in Jakarta opened a window of opportunity for a negotiated settlement. The terms for an agreement were progressively elaborated, but their implementation failed until 2004. Stalemate was unlocked by the heightened focus of the international community on Aceh following the tsunami disaster in December 2004 and the conciliatory initiatives of the newly elected President Susilo Bambang Yudhoyono. The authoritative involvement of Maarti Ahtisaari contributed much to bringing the negotiations to a successful outcome in July 2005. The EU proved willing and able to take over from there and launch a mission to monitor the peace agreement in the space of a few weeks. The AMM is the central component of a wider range of instruments and measures deployed by the EU in Aceh. The added value of the European intervention consists in the effective coordination of EU tools to both reconstruct the region ravaged by the tsunami and sustain the political process of reconciliation by facilitating reintegration and consolidating local administration. Coordination matters not only between EU actors but also with international partners. The AMM includes the sizeable contribution of five countries from ASEAN. This is tangible evidence of the EU's commitment to promoting regional organisations as a pillar of effective multilateralism.