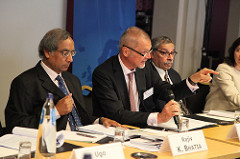 The forum convened European and Indian experts and practitioners as well as representatives of civil society and EU member states for an exchange of views and analysis on, inter alia, emerging political and strategic trends in India and in the European Union; Indian and EU perspectives on South Asia with a particular focus on Afghanistan; the role as well as evolution of political debates in India and the EU on the Syrian and the Ukrainian crises; evolving dynamics in Asia Pacific; and the state of play of the EU-India Strategic Partnership. A continuation of existing collaboration with the ICWA and the first EUISS event on India since 2012, the forum aimed to foster debate over respective positions on contemporary global and regional security challenges and to highlight the role and contributions of the EU to international security. Against the backdrop of imminent changes in leadership both in India as well as the EU following respective parliamentary elections and the upcoming 10th anniversary of the strategic partnership later this year, the Forum also sought to suggest ways forward for the EU-India strategic partnership in the coming decade.