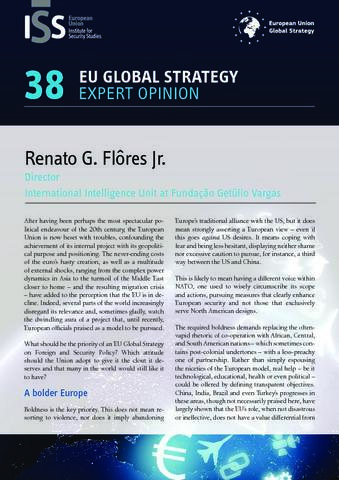 After having been perhaps the most spectacular political endeavour of the 20th century, the European Union is now beset with troubles, confounding the achievement of its internal project with its geopolitical purpose and positioning. The never-ending costs of the euro’s hasty creation, as well as a multitude of external shocks, ranging from the complex power dynamics in Asia to the turmoil of the Middle East closer to home – and the resulting migration crisis – have added to the perception that the EU is in decline. Indeed, several parts of the world increasingly disregard its relevance and, sometimes gladly, watch the dwindling aura of a project that, until recently, European officials praised as a model to be pursued.

What should be the priority of an EU Global Strategy on Foreign and Security Policy? Which attitude should the Union adopt to give it the clout it deserves and that many in the world would still like it to have?