New kids on the CFSP block: the JHA agencies 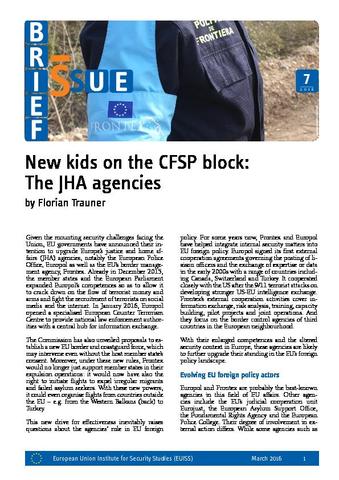 Given the mounting security challenges facing the Union, EU governments have announced their intention to upgrade Europe’s justice and home affairs (JHA) agencies, notably the European Police Office, Europol as well as the EU’s border management agency, Frontex. Already in December 2015, the member states and the European Parliament expanded Europol’s competences so as to allow it to crack down on the flow of terrorist money and arms and fight the recruitment of terrorists on social media and the internet. In January 2016, Europol opened a specialised European Counter Terrorism Centre to provide national law enforcement authorities with a central hub for information exchange. The Commission has also unveiled proposals to establish a new EU border and coastguard force, which may intervene even without the host member state’s consent. Moreover, under these new rules, Frontex would no longer just support member states in their expulsion operations: it would now have also the right to initiate flights to expel irregular migrants and failed asylum seekers. With these new powers, it could even organise flights from countries outside the EU – e.g. from the Western Balkans (back) to Turkey.