EU enlargement and armaments. Defence industries and markets of the Visegrad countries 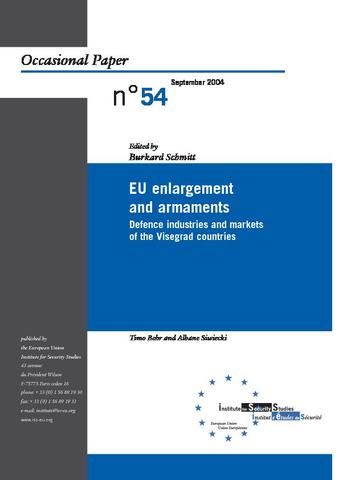 Since the end of the Cold War, the armaments sector in the Visegrad countries has gone through an important downsizing process. Shrinking home markets and the disruption of the Warsaw Pact cooperation mechanisms have put defence industries in the region under enormous pressure. The situation has improved slightly since the Czech Republic, Hungary, Poland and Slovakia increased their military expenditure in preparation for NATO membership. However, their combined military spending still represents only five per cent of the EU total. Moreover, their industrial and technological capabilities are limited in both quantitative and qualitative terms. Procurement funding remains modest and will be absorbed over the next 10 to 15 years by a few big acquisition projects. Given the limited technological capabilities of the Visegrad defence industries, most of these weapons systems are acquired off the shelf from abroad. However, local companies are often involved through offset arrangements, which have become economically crucial for the Visegrad defence industry. Up until now, the overall value of arms transfers from both EU and US suppliers to the region has been balanced. The US industry has, however, dominated exports to the Polish market and has concluded more important offset agreements than European companies. Russia remains another significant provider of military equipment to the Visegrad countries, due to its continuing repayment of Soviet-era debt. Although the Visegrad Four often face similar capability shortfalls, they have not translated common needs into common procurement projects. Industrial cooperation remains limited as well, with the exception of Slovak and Czech companies, which have maintained their historical ties. Industrial consolidation has been slow and has followed different paths in each country. In Poland and Slovakia, the most important defence companies have been assembled under the umbrella of state-owned holding groups, and privatisation remains limited. In the Czech Republic and Hungary, industrial conglomerates have been broken up or have disintegrated. Consequently, the market is dominated by a large number of small and medium-sized enterprises that are predominantly privately owned.
In general, arms production of the Visegrad countries remains in line with their former Warsaw Pact specialisation. Only a few companies have succeeded in developing state-of-the-art technologies and selling their products to other NATO countries. In order to survive in the long run, local defence companies will probably have to specialise further on niche capabilities and strengthen their role as suppliers for big international prime contractors. Offset arrangements can support this process if they are used as a means to foster modernisation rather than to maintain non-competitive facilities and structures. To help their local companies integrate into a defence industrial base that is increasingly transnational, the Visegrad countries should participate actively in the development of ongoing EU initiatives. Both the creation of the European Defence Agency and the Commission’s initiatives in security research and defence procurement law offer new opportunities to enhance the competitiveness of defence industries in those countries.