The EU and the UN: together for peace 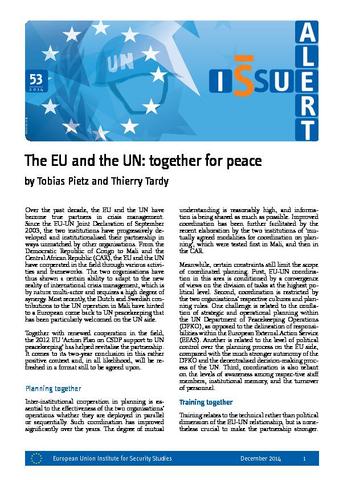 Over the past decade, the EU and the UN have become true partners in crisis management. Since the EU-UN Joint Declaration of September 2003, the two institutions have progressively developed and institutionalised their partnership in ways unmatched by other organisations. From the Democratic Republic of Congo to Mali and the Central African Republic (CAR), the EU and the UN have cooperated in the field through various activities and frameworks. The two organisations have thus shown a certain ability to adapt to the new reality of international crisis management, which is by nature multi-actor and requires a high degree of synergy. Most recently, the Dutch and Swedish contributions to the UN operation in Mali have hinted to a European come back to UN peacekeeping that has been particularly welcomed on the UN side.

Together with renewed cooperation in the field, the 2012 EU ‘Action Plan on CSDP support to UN peacekeeping’ has helped revitalise the partnership. It comes to its two-year conclusion in this rather positive context and, in all likelihood, will be refreshed in a format still to be agreed upon.