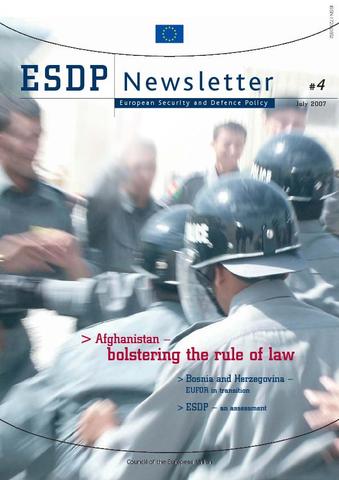 At dawn on 23 June, after close to 36 hours of intensive talks, EU leaders adopted a mandate for a Reform Treaty. In the field of foreign and security policy, the text foresees the EU should have, as of 2009, a High Representative for foreign affairs and security policy. The substance of the innovations agreed by the intergovernmental conference of 2004 is set to remain. This means in particular that the High Representative will chair the Foreign Affairs Council and that at the same time he will be one of the vice-presidents of the European Commission. He will be supported by a European external action service. Another important innovation is the permanent structured co-operation in the field of defence.
This is good news for Europe’s capacity to act in the world and for the coherence of its external action. In his speech in Aachen in May upon receiving the Charlemagne prize, High Representative Javier Solana called for a resolution of the institutional reform issue, in a world that is changing very rapidly: “No one knows better than we Europeans that if we wish policies to endure they must be sustained by institutions. We can only develop a genuine foreign policy if we give ourselves the necessary structures.”

For the EU is more and more in demand in external crises, says Nicole Gnesotto in a comment made to the Newsletter as she leaves the EU Institute for Security Studies. And it tends to respond positively. Like the High Representative, she adds that a key challenge is to make sure that this increase in the demand for EU solutions is matched by a reinforcement of its structures and means.

Such demand is further highlighted by Afghanistan and Kosovo. These are two very different places. But in both, building up the rule of law is an important challenge and a key to lasting stability. The EU is preparing to address these challenges through two civilian missions – including, in Kosovo, its largest ever – in the framework of its European Security and Defence Policy.

A sense of realism is called for more than ever in the face of the magnitude of the challenges facing Afghanistan. But, by working to support the Afghan National Police and coordinating international efforts, the EU is addressing a key area: without the rule of law and trusted law enforcement institutions, there cannot be durable stability and development. The Newsletter introduces this new mission which was launched in June and will add to the collective efforts in Afghanistan.

In Kosovo, the EU is ready to assume responsibilities in the field of the rule of law and police after a resolution on status is adopted. Here, too, caution is needed as political uncertainty remains. In any case, the Union is finalising its own preparations and will be able to step in quickly after settlement of the status issue. Kosovo is part of our continent and a priority for the EU, which will apply the full range of its tools – from the political perspective to assistance in the fields of reconstruction and the rule of law – in support of the Kosovo authorities.

Other situations where the EU has responded to demands include Aceh (Indonesia), Iraq, and Bosnia and Herzegovina. We return to Aceh to draw the lessons of the innovative monitoring mission (AMM) that ended last December, and turn our attention to the quiet success of the EUJUST-LEX mission for Iraq. On the military side, we look at EUFOR in Bosnia and Herzegovina as it completes its transition to a leaner – but no less effective – force.

The Newsletter also looks at some of the structures and the people meant to ensure that demand for EU action is met. In particular it meets with the new Director-General of the EU Military Staff, General Leakey, as he embarks on his tenure at the helm of this key EU permanent military structure.

With a new treaty on the horizon and important immediate challenges to address, the European Security and Defence Policy is forging ahead. As expectations grow regarding European solutions to international problems, it has no choice but consistently to develop its capacity to do so.