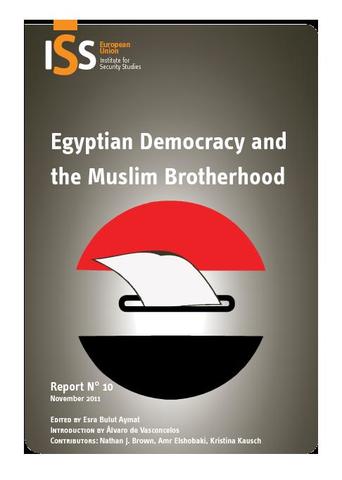 The citizens of Egypt are preparing for historic elections, due to begin later this month. In a period of considerable uncertainty over the actual and potential trajectories of post-Mubarak Egypt, the EUISS has invited three experts to share their insights, analysis and recommendations on Egyptian democracy and the Muslim Brotherhood with EU policymakers. Hailing from Egypt, the EU and US, the authors hold up three different prisms through which we can better understand developments in Egypt and the policy implications for the EU and US. Madrid-based Kristina Kausch provides us with a succinct guide to the pre-electoral political landscape, electoral scenarios, ‘cold coup’ risks, and EU policy implications. She draws attention to the significant risks posed to EU interests by an electoral and constitutional charade that would undermine Egypt’s democratic prospects and invite further turmoil. Cairo-based Amr Elshobaki presents a short overview of the Muslim Brotherhood’s historical evolution, and a survey of the current constitutional, institutional and ideological challenges facing Egypt. In light of this analysis of the Brotherhood’s journey and his survey of the evolving political framework, he advocates the careful and sustained integration of the Muslim Brotherhood into a democratic polity as a difficult but essential process. Washington DC-based Nathan J. Brown discusses the policy implications of these findings for Europeans and Americans wishing to play a constructive role in Egypt's transition, underlining potentially instructive parallels in Western political experience, and inviting outside policymakers to be frank, patient and consistent.

In addition to the rich food for thought to be derived from reading their concise analyses, each chapter concludes with clear-cut policy recommendations, ten in all. Kristina Kausch recommends that the EU move beyond a counter-productive focus on political Islam and Islamist ideology in its approach to potential and emerging Arab democracies, to focus instead on policy issues, all relevant actors and the importance to EU interests of successful democratic transitions and economic strategies.  The EU should make greater strategic use of its statements, put pressure on the SCAF and move away from ad hoc crisis management towards a comprehensive strategy. Amr Elshobaki calls on the EU to demonstrate clarity and consistency on the question of Egyptian democracy and put an end to perceived double standards towards democracy in the Middle East. He recommends the sustained support of effective electoral monitoring and the sharing of European expertise and experience, in particular with newly emerging Egyptian political actors. Nathan J. Brown cautions against outsiders playing winners and losers by variously supporting and excluding different political actors, pointing to the dangers of such tactics raising internal tensions and undermining liberal and secular forces in Egypt. He recommends that external actors should act multilaterally to communicate emerging international standards of governance, including with regard to holding elections and constitution-writing, as well as place sustained emphasis on human rights and universal values.

In sum, the report underlines the scale of the significant and inescapable choices facing Egyptians, Europeans and other actors at present. It invites us to look more closely at developments on the ground, their historical background and the risks of a stillborn democratic transition in Egypt. Together the authors advise caution, although not in the sense of inaction, indecision or ambivalence. All concur that it is imperative that European leaders do not miss the historic opportunity at hand to support a genuine democratic transition through reasoned, timely and strategic policies.