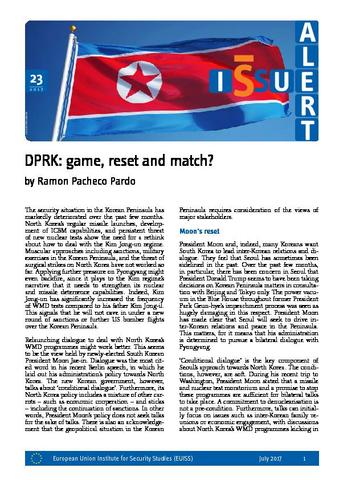 The security situation in the Korean Peninsula has markedly deteriorated over the past few months. North Korea’s regular missile launches, development of ICBM capabilities, and persistent threat of new nuclear tests show the need for a rethink about how to deal with the Kim Jong-un regime. Muscular approaches including sanctions, military exercises in the Korean Peninsula, and the threat of surgical strikes on North Korea have not worked so far. Applying further pressure on Pyongyang might even backfire, since it plays to the Kim regime’s narrative that it needs to strengthen its nuclear and missile deterrence capabilities. Indeed, Kim Jong-un has significantly increased the frequency of WMD tests compared to his father Kim Jong-il. This signals that he will not cave in under a new round of sanctions or further US bomber flights over the Korean Peninsula.

Relaunching dialogue to deal with North Korea’s WMD programmes might work better. This seems to be the view held by newly-elected South Korean President Moon Jae-in. Dialogue was the most cited word in his recent Berlin speech, in which he laid out his administration’s policy towards North Korea. The new Korean government, however, talks about ‘conditional dialogue’. Furthermore, its North Korea policy includes a mixture of other carrots – such as economic cooperation – and sticks – including the continuation of sanctions. In other words, President Moon’s policy does not seek talks for the sake of talks. There is also an acknowledgement that the geopolitical situation in the Korean Peninsula requires consideration of the views of major stakeholders.