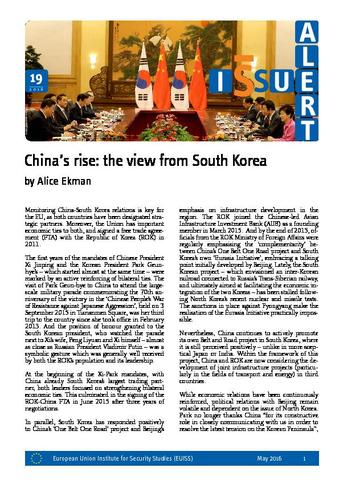 Monitoring China-South Korea relations is key for the EU, as both countries have been designated strategic partners. Moreover, the Union has important economic ties to both, and signed a free trade agreement (FTA) with the Republic of Korea (ROK) in 2011. The first years of the mandates of Chinese President Xi Jinping and the Korean President Park Geun-hye’s – which started almost at the same time – were marked by an active reinforcing of bilateral ties. The visit of Park Geun-hye to China to attend the large-scale military parade commemorating the 70th anniversary of the victory in the ‘Chinese People’s War of Resistance against Japanese Aggression’, held on 3 September 2015 in Tiananmen Square, was her third trip to the country since she took office in February 2013. And the position of honour granted to the South Korean president, who watched the parade next to Xi’s wife, Peng Liyuan and Xi himself – almost as close as Russian President Vladimir Putin – was a symbolic gesture which was generally well received by both the ROK’s population and its leadership.

China’s rise: the view from Singapore

China’s rise: a view from Australia