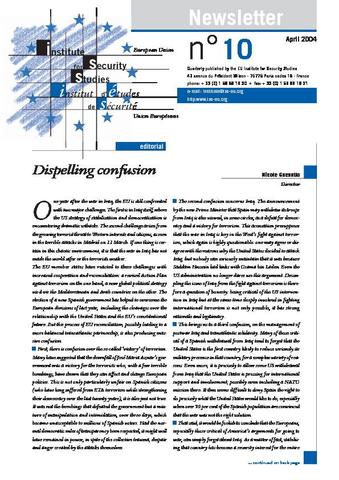 One year after the war in Iraq, the EU is still confronted with two major challenges. The first is in Iraq itself, where the US strategy of stabilisation and democratisation is encountering dramatic setbacks. The second challenge arises from the growing terrorist threat to Western interests and citizens, as seen in the terrible attacks in Madrid on 11 March. If one thing is certain in this chaotic environment, it is that the war in Iraq has not made the world safer or the terrorists weaker.

The EU member states have reacted to these challenges with increased cooperation and reconciliation: a revised Action Plan against terrorism on the one hand, a new global political strategy vis-à-vis the Mediterranean and Arab countries on the other. The election of a new Spanish government has helped to overcome the European divisions of last year,  including the cleavages over the relationship with the United States and the EU’s constitutional future. But this process of EU reconciliation, possibly leading to a more balanced transatlantic partnership, is also producing massive confusion.

Serbia and Croatia: after the elections