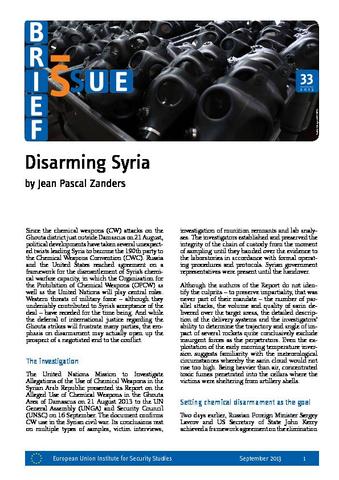 Since the chemical weapons (CW) attacks on the Ghouta district just outside Damascus on 21 August, political developments have taken several unexpected twists leading Syria to become the 190th party to the Chemical Weapons Convention (CWC). Russia and the United States reached agreement on a framework for the dismantlement of Syria’s chemical warfare capacity, in which the Organisation for the Prohibition of Chemical Weapons (OPCW) as well as the United Nations will play central roles. Western threats of military force – although they undeniably contributed to Syria’s acceptance of the deal – have receded for the time being. And while the deferral of international justice regarding the Ghouta strikes will frustrate many parties, the emphasis on disarmament may actually open up the prospect of a negotiated end to the conflict.

After the chemical attacks in Syria - now what?