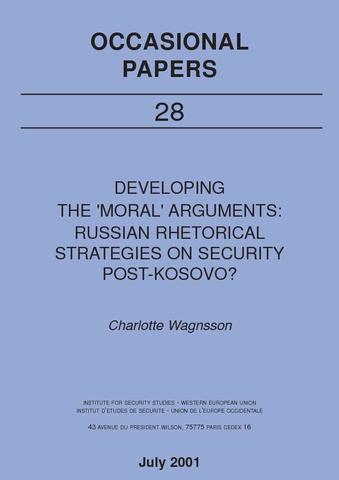 This paper analyses how the Russian top leadership’s rhetoric on security and the West evolved during and after NATO’s Operation Allied Force against Serbia in 1999. By grasping the logic inherent in political rhetoric, one can arrive at a better understanding of the messages that a political actor is trying to convey, which may also enhance one’s ability to predict how that actor will reason in the future. Political implications for relations between Russia and the European Union are discussed in the final section. Previous research has indicated that the Russian leaders’ rhetoric was relatively pro-Western during the period 1992-97. The political language continued to be relatively pro-Western, or at least ‘balanced’, in 1998. The leaders, however, remained hostile to the prospect of NATO enlargement and events in the Balkans began to strain relations with the West. Russia sharply condemned NATO’s campaign against Serbia and its president in 1999. The country’s leaders officially interpreted the bombings as an attempt to impose the United States’s will in world politics, thus reinforcing a unipolar world order. They condemned what they termed ‘theories of humanitarian intervention’ and pleaded for a stronger role for the UN and its Security Council in international relations. Further elaborating on their argument, they called for a joint struggle against separatism and terrorism in areas such as Kosovo and Chechnya. Although Vladimir Putin’s coming to power in 2000 did not alter the political language, it has been gradually evolving since the Kosovo war. Russia’s leaders elaborated increasingly on what could be termed moral – or ‘ethical’ – aspects of international relations. They maintained that their version of international ethics was morally superior and ought to apply.According to its leadership, Russia carried out a worthy mission, standing up for democratic values against unipolarity and terrorism, for the common good of the civilised world. Its leaders suggested diplomacy rather than force, condemning NATO’s actions as a ‘barbarian aggression against a sovereign state’. The Alliance’s conduct in their view threatened sovereignty and the entire international order, risking chaos and anarchy. The presidential team also protested at the US National Missile Defence (NMD) initiative, and proposed ‘constructive alternatives’. They stated that their aim was ‘a just and democratic security order’, while the ‘militarisation of space’, in the shape of NMD, would lead back to an uncontrolled arms race. While developing its moral arguments, Russia’s use of threats diminished, and at the same time it kept a working relationship with the West. Although they remained quite consistent and persistent in their condemnation of the behaviour of NATO and the United States, Russia’s leaders nevertheless manifested a clear desire to improve mutual relations.