A democratic transition in trouble: the need for aid conditionality in Egypt 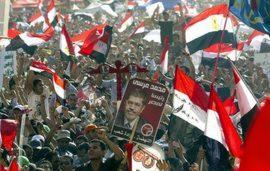 Elections are supposed to, among other things, bestow legitimacy to fledging institutions. In Egypt, the opposite seems to have occurred. After seemingly endless voting – the polls have been open no less than 17 days over eight election rounds – Egypt’s first democratically-elected parliament was dissolved, while the presidency was stripped of many of its powers. The early mistakes of what some have called the “stupidest transition in history” have accumulated. Each competing power – the military, the Brotherhood, and so-called ‘third way’ liberals – believes in its own set of rules, backed by its own set of legal interpretations. What a transition needs more than anything else is legitimacy, but this is precisely what Egypt lacks the most.

Take, for example, President Mohamed Morsi’s recent move to reinstate parliament, which had just weeks before been invalidated by the Supreme Constitutional Court. No one knows for sure whether Morsi’s move was, in fact, ‘legal’. The court, for its part, held an emergency meeting and found that Morsi’s decree was not legal. Of course, coming to a different conclusion would have been tantamount to ruling against itself, something which the court was unlikely to do.

The Muslim Brotherhood has been criticised for running roughshod over the rule of law, leading some to question the group’s commitment to the ‘separation of powers’. But the very meaning of such a separation is itself contested. Under the Mubarak regime, the executive branch dominated the legislature and the judiciary. In the new Egypt, the old power imbalances persist. Usually, separation of powers assumes an independent judiciary, something that Egypt does not currently have. The judiciary, populated with Mubarak appointees, is part of the old regime and has acted as a virtual extension of the military. Its decision to effectively dissolve parliament was coordinated with Supreme Council of the Armed Forces (SCAF). In an interview with the New York Times, Judge Tahani Gabali, deputy president of the Supreme Constitutional Court, admitted she had assisted SCAF – the executive branch – in drafting constitutional provisions that would guarantee the military’s ability to intervene in domestic politics. She also advised the ruling military council to indefinitely postpone parliamentary elections. “I knew the elections would bring an [Islamist] majority,” she said by way of explanation.

Many of Egypt’s most prominent judges have – with surprising frankness – openly admitted their lack of independence. In June, Ahmed al-Zend, the head of the Judges’ Association, accused the Brotherhood of having “a systematic plan” to destroy the country. “We used to stand at the edge of the judiciary and not go near politics,” he explained. “But now Egypt is falling. We won’t leave matters for those who can’t manage them, with the excuse that we’re not people of politics. No, we are people of politics.”

All of this raises a question with no simple answer: should the Muslim Brotherhood respect a judiciary that seems out to get it, or should it play the game just as its opponents have – with open disregard for both the law and the integrity of the democratic process? With this in mind, what might appear to be a legal battle is much more clearly a contest for power. As it happens, each side’s legal interpretations almost always support whatever its partisan interest happens to be at a given moment. No one, however well intentioned, seems capable of separating their own particular set of interests from broader concerns over the rule of law and institutional integrity. This, in part, is because each side sees its partisan preoccupations as approximating either the state’s interests or the popular will. This is no way to run a transition. At this point though, the best that can be hoped for is that the struggle for power does not last anything close to 50 years (as it did in Turkey) and that each side conducts itself with at least some minimal regard for its opponents (this would preclude, for example, the military moving to depose the president).

In short, Egyptian democrats face considerable odds in rolling back an ‘old regime’ that is firmly entrenched in state institutions. Unlike other transitional countries, regime elements have made little effort – and shown little interest – in ‘switching sides’. The rise of the Brotherhood and other Islamists has only reinforced the fear that many Egyptian elites have of ‘mass rule’.

What can the West do?

As much as Western policymakers insist that Egyptians must make this transition on their own, the unfortunate reality is that they probably can’t. In recent years, a growing academic literature has pointed to the critical role of international actors in bringing down autocrats. In their 2010 book Competitive Authoritarianism: Hybrid Regimes After the Cold War, Steven Levitsky and Lucan Way provide extensive empirical support to what many have long argued. They write, ‘It was an externally driven shift in the cost of suppression, not changes in domestic conditions, that contributed most centrally to the demise of authoritarianism in the 1980s and 1990s.’ Levitsky and Way find that ‘states’ vulnerability to Western democratization pressure…was often decisive.’

The Obama administration’s MENA incentive fund and the European Union’s Support for Partnership Reform, and Inclusive Growth (SPRING) programme are both nods in the direction of aid conditionality, which would seem to suggest a shift in approach. According to one EU document explaining the rationale of SPRING, ‘the more a country progresses in its democratic reforms and institutional building, the more support it can expect.’ However, the conditionality mechanisms and benchmarks are left vague and undefined. The furthest the EU goes is to say is that it will ‘take the reform track record of partners during the 2010-12 period (based on the annual progress reports) into account when deciding on country financial allocations for 2014 and beyond.’ Conditionality mechanisms were similarly undefined during the pre-Arab Spring years of the European Neighbourhood Policy (ENP). Despite a worsening political environment, countries like Egypt and Jordan did not suffer any significant loss of assistance (Jordan, in fact, saw an increase in aid). The ENP’s monitoring mechanism, like SPRING’s today, was simply left open to interpretation with little enforcement.

There is also the matter of money – not enough of it. Ideally, aid conditionality is, among other things, a way to increase leverage with recipient countries, to encourage them to do things they might not otherwise do. Yet, the total US and EU ‘incentivised’ funds amount to a total of about $1.3 billion annually. This means that no one country can expect to get more than a couple hundred million dollars at most – a number which is simply too small to boost leverage.

The question of conditionality is complicated by the role of the Gulf states, which are pledging billions to Egypt themselves. As part of a $2.7 billion aid package, Saudi Arabia made a direct $1 billion cash transfer to Egypt’s Central Bank in May. Saudi Arabian funding does not, obviously, come with any strings attached on political reform. But it does come with other conditions that limit Egypt’s freedom of movement on foreign policy. Gulf states have also failed to meet their aid pledges in the past. Either way, Gulf largesse is no excuse for US and European inaction. If anything, it suggests that the way forward is a more effective pooling of resources among the US, European nations, and rising democracies like Turkey and Brazil, in addition to international financial institutions like the World Bank and the IMF. (Along these lines, I propose the idea of a ‘Multilateral Reform Endowment’ in this recent Brookings paper.)

In short, if the goal is to pressure recalcitrant governments and encourage real, sustained democratisation, then the current strategy will not do. First, when it comes to Egypt, the US and the European Union should coordinate policy and seriously consider temporarily suspending military aid. Second, any future economic assistance should depend on demonstrating progress on key political indicators, including transfer of power to civilian rule and respect for civil society. Those benchmarks should be clearly defined and announced in public as part of a broader public diplomacy strategy. SCAF’s violations have been and continue to be rather egregious. In the span of one week in June, it reinstated martial law, dissolved a democratically elected parliament, and imposed an eleventh hour decree which stripped the presidency of its powers. If this is not a red line for the United States and Europe, then what is?

Can the Tunisian revolution be reversed?