Can the Tunisian revolution be reversed? 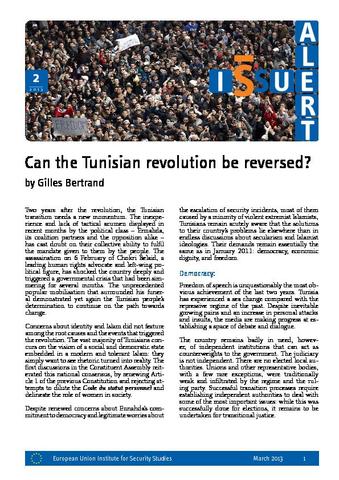 Two years after the revolution, the Tunisian transition needs a new momentum. The inexperience and lack of tactical acumen displayed in recent months by the political class – Ennahda, its coalition partners and the opposition alike – has cast doubt on their collective ability to fulfil the mandate given to them by the people. The assassination on 6 February of Chokri Belaid, a leading human rights advocate and left-wing political figure, has shocked the country deeply and triggered a governmental crisis that had been simmering for several months. The unprecedented popular mobilisation that surrounded his funeral demonstrated yet again the Tunisian people’s determination to continue on the path towards change. Concerns about identity and Islam did not feature among the root causes and the events that triggered the revolution. The vast majority of Tunisians concurs on the vision of a social and democratic state embedded in a modern and tolerant Islam: they simply want to see rhetoric turned into reality. The first discussions in the Constituent Assembly reiterated this national consensus, by renewing Article 1 of the previous Constitution and rejecting attempts to dilute the Code du statut personnel and delineate the role of women in society. Despite renewed concerns about Ennahda’s commitment to democracy and legitimate worries about the escalation of security incidents, most of them caused by a minority of violent extremist Islamists, Tunisians remain acutely aware that the solutions to their country’s problems lie elsewhere than in endless discussions about secularism and Islamist ideologies. Their demands remain essentially the same as in January 2011: democracy, economic dignity, and freedom.