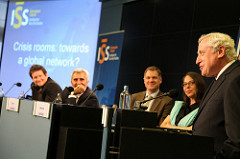 The event opened with a presentation of the EUISS’s ‘Yearbook of European Security: YES 2014’. The second edition of the Yearbook of European Security (YES) builds on the experience of last year’s pilot edition while enriching the contents by including a comprehensive survey of the EU ‘toolbox’ as well as a targeted analysis of European defence spending. The 2014 ‘mapping’ exercise is devoted to identifying and assessing the changes and developments that have occurred in three ‘signature’ countries (Tunisia, Egypt and Libya) of the so-called ‘Arab Spring’ at the grassroots level. The presentation also highlighted the importance of Defence and R&D spending data - included in this year’s edition of the yearbook - and was followed by a high-level panel with EU officials. The discussion focused on the EU’s achievements in crisis management over the last few years, and the role of the EU and its institutions in the years to come. Subsequently, there was a debate around the EUISS/EEAS book ‘Crisis Rooms: towards a global network?’ It was noted that this publication deals with a topic familiar to many who attended the high-level conference on Crisis Rooms in December last year and that the book reflects major themes discussed at that event. A panel of experts – including Agostino Miozzo, the EEAS Managing Director for Crisis Management offered their reflections on the EU’s record in dealing with complex crises and the main challenges ahead. EEAS Secretary-General Pierre Vimont then delivered the closing statement.