A common European export policy for defence and dual-use items? 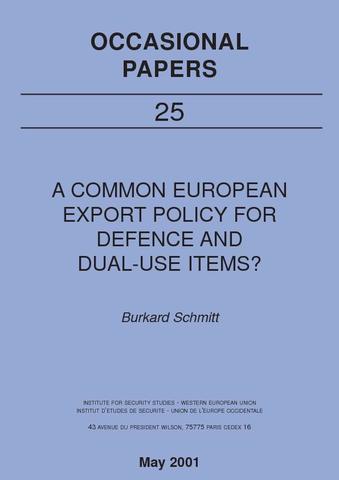 In Europe, arms and dual-use exports raise complex questions. First, they fall between two policy spheres that are organised in a distinctly contrasting manner. On the one hand, they are an intrinsic part of commercial policy that lies within the exclusive competence of the European Community (EC). On the other hand, they come under the aegis of security and defence policy, a jealously guarded area of responsibility of the EU member states. Second, there is no common European export policy. Arms exports, in particular, remain a sensitive issue on which Europeans have difficulties in reaching a consensus. Strong divisions exist mainly (but not exclusively) between arms producing and non-producing countries. Consequently, the institutional setting is complicated. Whilst the dual-use regime forms part of pillar one of the European Union (EC), the Code of Conduct on arms exports belongs to pillar two (CFSP). Moreover, the six major arms producing European countries have established their own rules on transfers and exports for cooperative programmes that remain completely outside of the EU framework (the Letter of Intent, or LoI). The European Community export control regime for dual-use goods is based on mutual recognition of national export decisions. Moreover, the Council Regulation in question is part of Community law. As a consequence, multilateral non-proliferation agreements are legally binding on all EU member states. The EU Code of Conduct for Arms Exports, in contrast, provides only broad moral and political standards. It is not legally binding and its consultation mechanism is mainly restricted to undercutting. Finally, the Framework Agreement between the major arms producing countries establishes an export regime for cooperative armaments projects that is, in effect, a de facto licence-free zone among the six participants and a decision-making mechanism for exports of jointly developed weapon systems to third countries. In contrast to the dual-use regime, export provisions of the Framework Agreement operate only on an ad hoc basis and are applied differently to each and every cooperative programme. The absence of a common export policy undermines all three arrangements. Indeed, the dual-use regime is built upon the mutual acceptance of divergent policies, whereas the Code of Conduct merely tries to limit the worst excesses of political divergence on arms exports, and the Framework Agreement offers only a mechanism for ad hoc agreements. Equally, all three arrangements are ongoing processes that might one day form the basis for convergence towards a common policy. With regards to dual-use items, there is a clear trend towards liberalisation that will probably become even stronger following the recent strengthening of the Commission and the introduction of qualified majority voting in the Council. By contrast, the EU Code of Conduct suffers from persistent divergences. Although it has established a consultation process that might, in time, help bridge these gaps, progress toward a truly common export policy will be slow and dependent on the development of a Common European and Security Policy (CESDP) and a Common Foreign and Security Policy (CFSP). Decision-making under the LoI Framework Agreement promises to be both sensitive and substantive. Focusing on specific export decisions and covering the most important programs, the LoI mechanism goes to the core of European policy divergences, and could become a powerful and effective driving force towards European convergence. This does not mean that a rapprochement will be easy to achieve. Indeed, conflicts between the current German government and its French and British counterparts seem preordained. Nevertheless, the ongoing cross-border restructuring of European defence industries is putting all LoI governments under pressure to harmonize their export policies. The most ‘Europeanized’ sectors, namely aerospace and defence electronics, are actively lobbying for a broad application of the principles of the Schmidt-Debré accord within the context of the LoI process, leaving the final decision to the country that holds the contract. In accordance with the principles of the dual-use regime, such an agreement would allow the free circulation of defence items among the parties concerned. From an economic point of view, this would indeed be the most rational and logical solution. In the foreseeable future, however, such an agreement could, at best, only be reached outside the EU framework among the LoI partners.