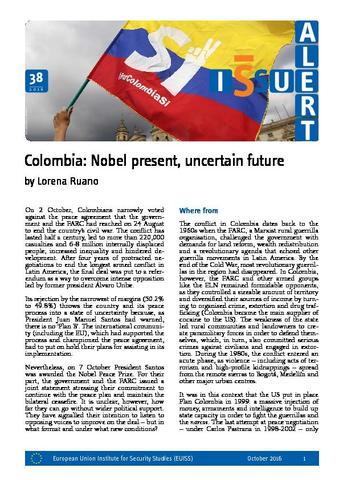 On 2 October, Colombians narrowly voted against the peace agreement that the government and the FARC had reached on 24 August to end the country’s civil war. The conflict has lasted half a century, led to more than 220,000 casualties and 6-8 million internally displaced people, increased inequality and hindered development. After four years of protracted negotiations to end the longest armed conflict in Latin America, the final deal was put to a referendum as a way to overcome intense opposition led by former president Álvaro Uribe. Its rejection by the narrowest of margins (50.2% to 49.8%) throws the country and its peace process into a state of uncertainty because, as President Juan Manuel Santos had warned, there is no ‘Plan B’. The international community (including the EU), which had supported the process and championed the peace agreement, had to put on hold their plans for assisting in its implementation.