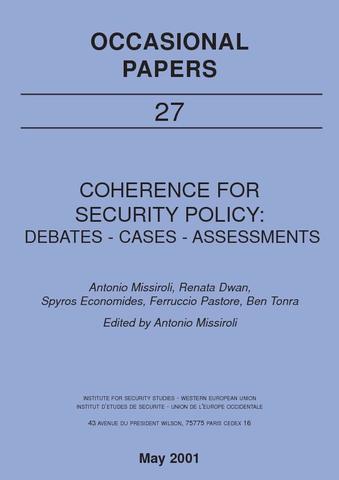 This Occasional Paper stems from a series of meetings of an ISS Task Force on ‘The Coherence of CFSP’ held in Paris between October 2000 and April 2001. Task Forces are small groups of experts and officials from member States, international bodies and think tanks that convene periodically to discuss a given topic or policy area. They usually include a ‘core group’ of members and other participants that join in according to the specific focus of each meeting. In particular, the papers that we decided to print here were first given at the second meeting of the Task Force held in January 2001. The authors have substantially revised and updated their initial contributions in light also of the ensuing debate. We thank them - along with all the other participants - for their willingness to put their thoughts on paper and to allow us to circulate them in the present format. A slightly modified version of the Introduction is due to be published in a forthcoming issue of the European Foreign Affairs Review.