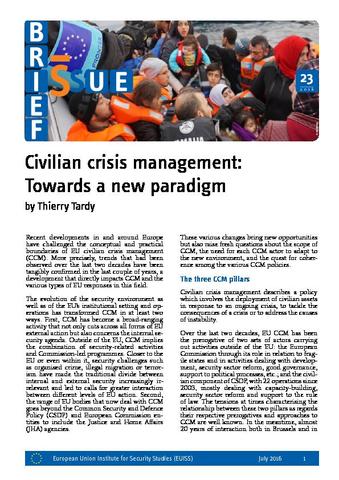 Recent developments in and around Europe have challenged the conceptual and practical boundaries of EU civilian crisis management (CCM). More precisely, trends that had been observed over the last two decades have been tangibly confirmed in the last couple of years, a development that directly impacts CCM and the various types of EU responses in this field. The evolution of the security environment as well as of the EU’s institutional setting and operations has transformed CCM in at least two ways. First, CCM has become a broad-ranging activity that not only cuts across all forms of EU external action but also concerns the internal security agenda. Outside of the EU, CCM implies the combination of security-related activities and Commission-led programmes. Closer to the EU or even within it, security challenges such as organised crime, illegal migration or terrorism have made the traditional divide between internal and external security increasingly irrelevant and led to calls for greater interaction between different levels of EU action. Second, the range of EU bodies that now deal with CCM goes beyond the Common Security and Defence Policy (CSDP) and European Commission entities to include the Justice and Home Affairs (JHA) agencies.

Tackling the challenges of SSR