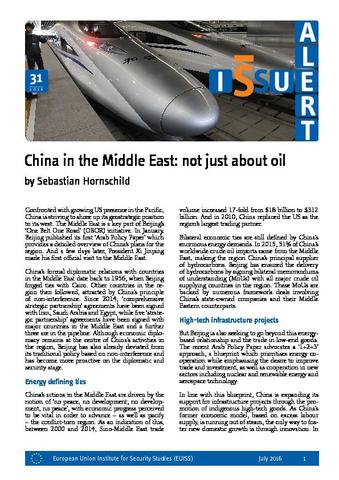 Confronted with growing US presence in the Pacific, China is striving to shore up its geostrategic position to its west. The Middle East is a key part of Beijing’s ‘One Belt One Road’ (OBOR) initiative. In January, Beijing published its first ‘Arab Policy Paper’ which provides a detailed overview of China’s plans for the region. And a few days later, President Xi Jinping made his first official visit to the Middle East. China’s formal diplomatic relations with countries in the Middle East date back to 1956, when Beijing forged ties with Cairo. Other countries in the region then followed, attracted by China’s principle of non-interference. Since 2014, ‘comprehensive strategic partnership’ agreements have been signed with Iran, Saudi Arabia and Egypt, while five ‘strategic partnership’ agreements have been signed with major countries in the Middle East and a further three are in the pipeline. Although economic diplomacy remains at the centre of China’s activities in the region, Beijing has also already deviated from its traditional policy based on non-interference and has become more proactive on the diplomatic and security stage.