China’s rise: the view from Singapore 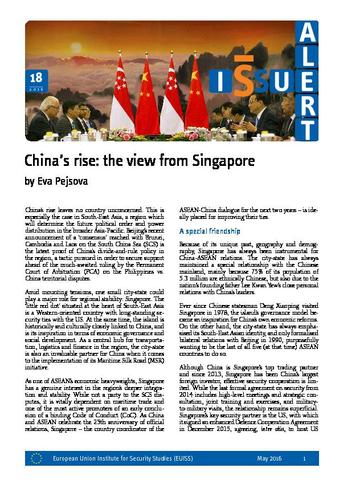 China’s rise leaves no country unconcerned. This is especially the case in South-East Asia, a region which will determine the future political order and power distribution in the broader Asia-Pacific. Beijing’s recent announcement of a ‘consensus’ reached with Brunei, Cambodia and Laos on the South China Sea (SCS) is the latest proof of China’s divide-and-rule policy in the region, a tactic pursued in order to secure support ahead of the much-awaited ruling by the Permanent Court of Arbitration (PCA) on the Philippines vs. China territorial disputes. Amid mounting tensions, one small city-state could play a major role for regional stability: Singapore. The ‘little red dot’ situated at the heart of South-East Asia is a Western-oriented country with long-standing security ties with the US. At the same time, the islands are historically and culturally closely linked to China, and also act as inspiration in terms of economic governance and social development for policymakers in Beijing. As a central hub for transportation, logistics and finance in the region, the city-state is also an invaluable partner for China when it comes to the implementation of its Maritime Silk Road (MSR) initiative.