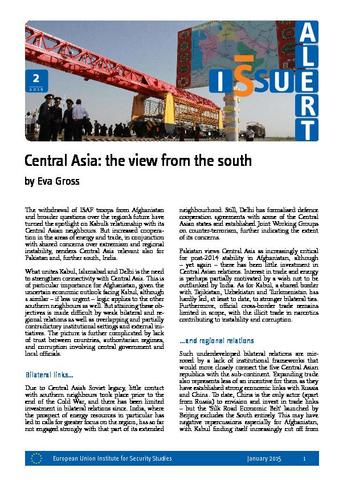 The withdrawal of ISAF troops from Afghanistan and broader questions over the region’s future have turned the spotlight on Kabul’s relationship with its Central Asian neighbours. But increased cooperation in the areas of energy and trade, in conjunction with shared concerns over extremism and regional instability, renders Central Asia relevant also for Pakistan and, further south, India. What unites Kabul, Islamabad and Delhi is the need to strengthen connectivity with Central Asia. This is of particular importance for Afghanistan, given the uncertain economic outlook facing Kabul, although a similar – if less urgent – logic applies to the other southern neighbours as well. But attaining these objectives is made difficult by weak bilateral and regional relations as well as overlapping and partially contradictory institutional settings and external initiatives. The picture is further complicated by lack of trust between countries, authoritarian regimes, and corruption involving central government and local officials.