The CARD on the EU defence table 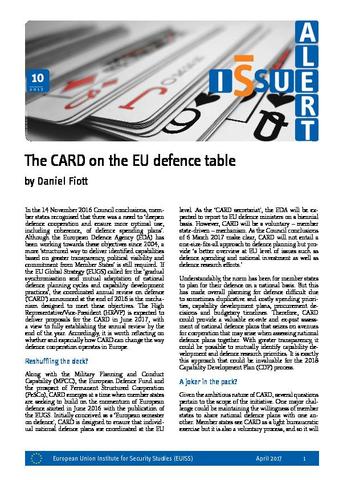 In the 14 November 2016 Council conclusions, member states recognised that there was a need to ‘deepen defence cooperation and ensure more optimal use, including coherence, of defence spending plans’. Although the European Defence Agency (EDA) has been working towards these objectives since 2004, a more ‘structured way to deliver identified capabilities based on greater transparency, political visibility and commitment from Member States’ is still required.

If the EU Global Strategy (EUGS) called for the ‘gradual synchronisation and mutual adaptation of national defence planning cycles and capability development practices’, the coordinated annual review on defence (‘CARD’) announced at the end of 2016 is the mechanism designed to meet these objectives. The High Representative/Vice-President (HR/VP) is expected to deliver proposals for the CARD in June 2017, with a view to fully establishing the annual review by the end of the year. Accordingly, it is worth reflecting on whether and especially how CARD can change the way defence cooperation operates in Europe.