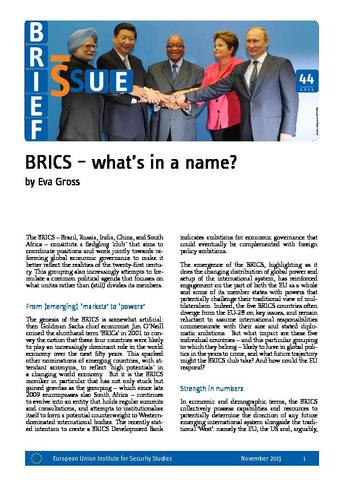 The BRICS – Brazil, Russia, India, China, and South Africa – constitute a fledgling ´club´ that aims to coordinate positions and work jointly towards reforming global economic governance to make it better reflect the realities of the twenty-first century. This grouping also increasingly attempts to formulate a common political agenda that focuses on what unites rather than (still) divides its members.  The emergence of the BRICS, highlighting as it does the changing distribution of global power and setup of the international system, has reinforced engagement on the part of both the EU as a whole and some of its member states with powers that potentially challenge their traditional view of multilateralism. Indeed, the five BRICS countries often diverge from the EU-28 on key issues, and remain reluctant to assume international responsibilities commensurate with their size and stated diplomatic ambitions.  But what impact are these five individual countries – and this particular grouping to which they belong – likely to have in global politics in the years to come, and what future trajectory might the BRICS club take? And how could the EU respond?