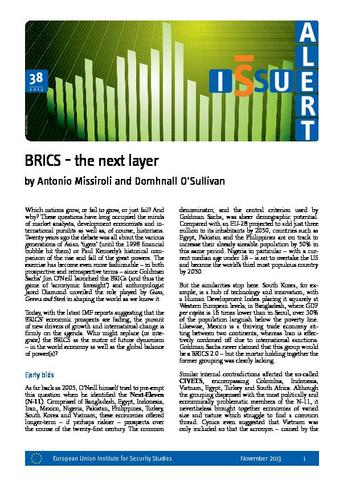 Which nations grow, or fail to grow, or just fail? And why? These questions have long occupied the minds of market analysts, development economists and international pundits as well as, of course, historians. Twenty years ago the debate was all about the various generations of Asian ‘tigers’ (until the 1998 financial bubble hit them) or Paul Kennedy’s historical comparison of the rise and fall of the great powers. The exercise has become even more fashionable – in both prospective and retrospective terms – since Goldman Sachs’ Jim O’Neill launched the BRICs (and thus the game of ‘acronymic foresight’) and anthropologist Jared Diamond unveiled the role played by Guns, Germs and Steel in shaping the world as we know it. Today, with the latest IMF reports suggesting that the BRICS’ economic prospects are fading, the pursuit of new drivers of growth and international change is firmly on the agenda. Who might replace (or integrate) the BRICS as the motor of future dynamism – in the world economy as well as the global balance of power(s)?