The Bosnian war and the new world order 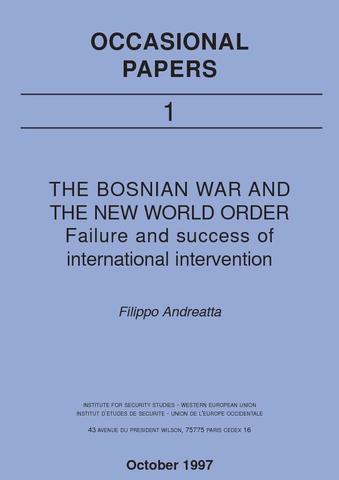 The war in Bosnia has witnessed a broad swing in the moods of the "international community" and of European nations particularly. In the wake of the end of the Cold War and of the victory in the Gulf War, expectations run high at the outbreak that collective security would have been able to deal with regional disturbances. Three years later, the "international community" had accumulated many frustrations and the IFOR operation which put an end to the fighting was regarded as a highly specific one which was unlikely to be repeated in other contingencies. This paper argues that both the initial and the final attitudes toward the Bosnian War have been excessive and, somehow, related. The initial optimism rested on uncertain foundations and was very likely to fail. The delusion, in turn, produced a cynical mood in which the initial mistakes were reversed and substituted with a pessimistic assessment of the prospects for long term stability. A more balanced attitude would not have produced such extremes and would have maintained a consensus in the "international community" for a wise and moderate engagement in regional stability.

The initial enthusiasm brought about an unrealistic strategy which did not adequately balance ends and means. The Vance-Owen Peace Plan, despite the fact that it was bitterly criticized at the time for rewarding aggression, required a Bosnian Serb retreat from 27% of Bosnian territory to a total 43%, while the various cantons assigned to the three communities were displayed in a patchwork and would have therefore required post-war cooperation. With hindsight, these objectives were overly ambitious for an "international community" which did not have the willingness to upgrade its military presence and which was therefore limited to a peacekeeping mission. In these circumstances, UNPROFOR's presence was not geared to reverse aggression and to stabilise the area, but only to avert the worst humanitarian disasters. Three years later, the "international community" finally applied sufficient force to stop the violence and impose a settlement. However, the objectives had in the meantime been scaled down dramatically, as the Republika Sprska retained control of 49% of the territory and enjoyed territorial continuity, which is a fundamental prerequisite for partition.