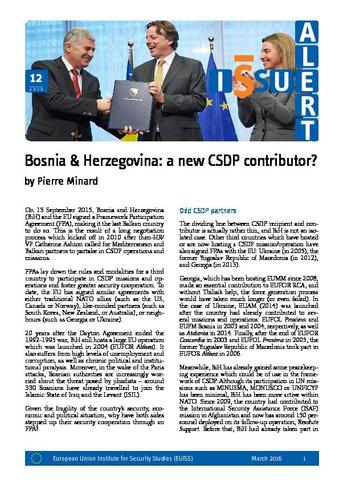 On 15 September 2015, Bosnia and Herzegovina (BiH) and the EU signed a Framework Participation Agreement (FPA), making it the last Balkan country to do so. This is the result of a long negotiation process which kicked off in 2010 after then-HR/VP Catherine Ashton called for Mediterranean and Balkan partners to partake in CSDP operations and missions. FPAs lay down the rules and modalities for a third country to participate in CSDP missions and operations and foster greater security cooperation. To date, the EU has signed similar agreements with either traditional NATO allies (such as the US, Canada or Norway), like-minded partners (such as South Korea, New Zealand, or Australia), or neighbours (such as Georgia or Ukraine).

Bosnia and Herzegovina: back on an EU track?