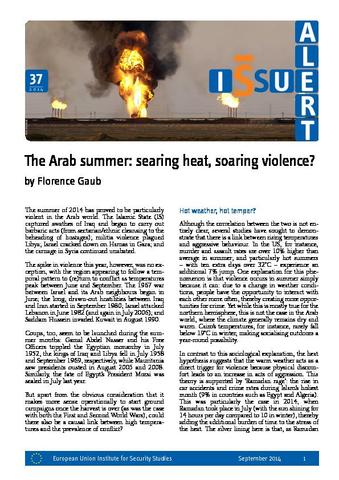 The summer of 2014 has proved to be particularly violent in the Arab world. The Islamic State (IS) ­captured swathes of Iraq and began to carry out barbaric acts (from sectarian/ethnic cleansing to the beheading of hostages); militia violence plagued Libya; Israel cracked down on Hamas in Gaza; and the carnage in Syria continued unabated. The spike in violence this year, however, was no exception, with the region appearing to follow a temporal pattern to (re)turn to conflict as temperatures peak between June and September. The 1967 war between Israel and its Arab neighbours began in June; the long, drawn-out hostilities between Iraq and Iran started in September 1980; Israel attacked Lebanon in June 1982 (and again in July 2006); and Saddam Hussein invaded Kuwait in August 1990. But apart from the obvious consideration that it makes more sense operationally to start ground campaigns once the harvest is over (as was the case with both the First and Second World Wars), could there also be a causal link between high temperatures and the prevalence of conflict?