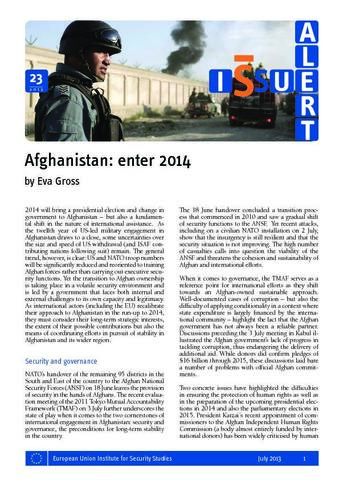 2014 will bring a presidential election and change in government to Afghanistan – but also a fundamental shift in the nature of international assistance. As the twelfth year of US-led military engagement in Afghanistan draws to a close, some uncertainties over the size and speed of US withdrawal (and ISAF contributing nations following suit) remain. The general trend, however, is clear: US and NATO troop numbers will be significantly reduced and reoriented to training Afghan forces rather than carrying out executive security functions. Yet the transition to Afghan ownership is taking place in a volatile security environment and is led by a government that faces both internal and external challenges to its own capacity and legitimacy. As international actors (including the EU) recalibrate their approach to Afghanistan in the run-up to 2014, they must consider their long-term strategic interests, the extent of their possible contributions but also the means of coordinating efforts in pursuit of stability in Afghanistan and its wider region.

Afghanistan 2011-2014 and beyond: from support operations to sustainable peace