Yemen: the evolution of a problem 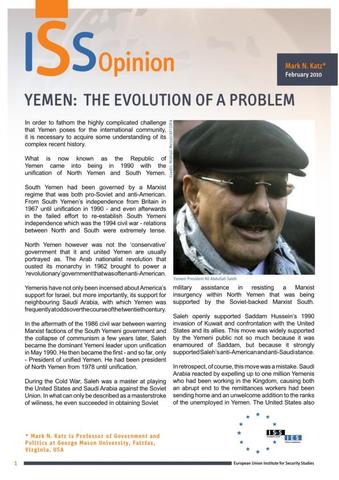 President Saleh faces two internal security threats that pose a more serious challenge to his continued rule than al-Qaeda: the ongoing Houthi rebellion in the north of the country that began in 2004, and the growing movement to restore the independence of South Yemen.

Is Saleh stepping up his cooperation with the US because he is gradually recognising al-Qaeda as a threat to his Presidency? Or is he simply repeating a successful formula by playing on an external party’s greatest fear - Marxists in the past, al-Qaeda now - in order to acquire resources for use against his internal adversaries?

Professor Mark Katz warns that increasing US support for Saleh and its military approach to the al-Qaeda threat may lead to strong anti-US sentiment among the Yemeni public. He argues that the European Union has the resources to be a significant player in Yemen, helping to arrest its deteriorating security situation by taking the lead in terms of human rights and development initiatives.