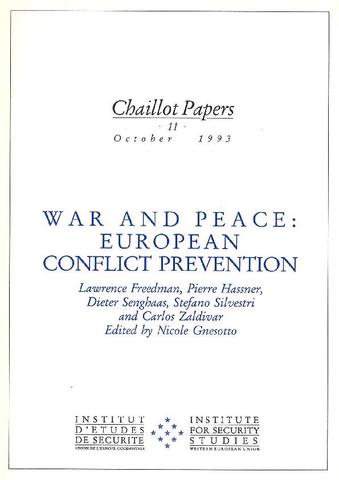 For more than two years, wars and atrocities all too reminiscent of another epoch have set in – perhaps permanently – in the heart of Europe. Yet the Continent is for the most part focused towards its prosperity, its restored security and the extension of fundamental liberties. This coexistence of peace and war is not attributable solely to the collapse of the former Yugoslavia. In the former Soviet Union as a whole the pattern is echoed in one republic or another and threatens at any moment to spread to Russia itself, or to involve Russia and one or other of those republics. For over forty years the communist threat and nuclear deterrence froze the march of history in Europe, under the double seal of relative stability for the whole continent and a tyranny clearly reserved for its eastern part. The explosion of political liberty in the East has ended this division and, paradoxically, introduced into the European order regional anarchy of the most traditional type. The end of the Cold War has been marked in effect by the return of real wars to Europe.

And yet with this reservation, that a conflict in Sarajevo does not imply the risk of global conflagration but merely signifies that a war is raging in Sarajevo. A security differential is now growing, from west to east and from north to south of what can be regarded as Europe from a strategic point of view: Washington is much more secure than Bonn, London or Paris, and the latter capitals are much more secure than Budapest, Kiev or Skopje. If the notion of collective security has any meaning, it is more that of a myth or a long-term objective than of a reality for Europe in 1993. The general rule today is rather the inequality of Europeans in the face of war and the diversity of reactions in the face of a given conflict, and thus the primacy of national differences over contractual or de facto solidarity. The nationalism which is now feeding the new logic of European wars is not, after all, the exclusive right of the former Soviet empire. For the European Community and Western countries in general managing other people's wars has become both a common necessity and one variable, among others, in their national interests. Formerly, the collective threat gave rise to a reflex of collective response; today's different, limited risks generate minimal, divergent responses.