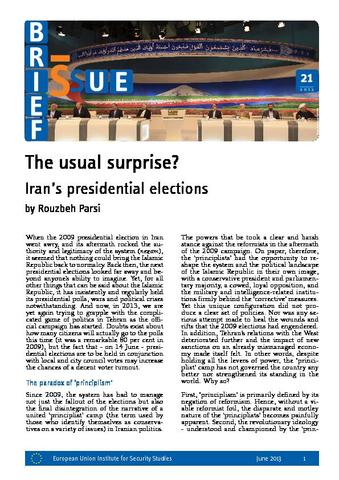 When the 2009 presidential election in Iran went awry, and its aftermath rocked the authority and legitimacy of the system (nezam), it seemed that nothing could bring the Islamic Republic back to normalcy. Back then, the next presidential elections looked far away and beyond anyone's ability to imagine.
Yet, for all other things that can be said about the Islamic Republic, it has insistently and regularly held its presidential polls, wars and political crises notwithstanding. And now, in 2013, we are yet again trying to grapple with the complicated game of politics in Tehran as the official campaign has started. Doubts exist about how many citizens will actually go to the polls this time (it was a remarkable 80 per cent in 2009), but the fact that - on 14 June - presidential elections are to be held in conjunction with local and city council votes may increase the chances of a decent voter turnout.

Iran: a revolutionary republic in transition