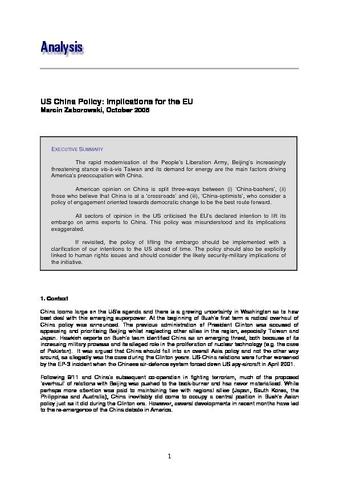 The rapid modernisation of the People's Liberation Army, Beijing's increasingly threatening stance vis-à-vis Taiwan and its demand for energy are the main factors driving America's preoccupation with China. American opinion on China is split three-ways between (i) 'China-bashers', (ii) those who believe that China is at a 'crossroads' and (iii), 'China-optimists', who consider a policy of engagement oriented towards democratic change to be the best route forward. All sectors of opinion in the US criticised the EU's declared intention to lift its embargo on arms exports to China. This policy was misunderstood and its implications exaggerated. If revisited, the policy of lifting the embargo should be implemented with a clarification of our intentions to the US ahead of time. The policy should also be explicitly linked to human rights issues and should consider the likely security-military implications of the initiative.