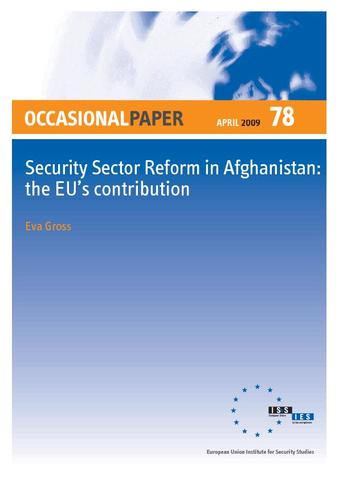 The EU engages in aspects of Security Sector Reform (SSR) through EUPOL Afghanistan, the police mission launched in 2007, and through the European Commission’s contributions to justice reform in the country. Based on an analysis of past efforts at police reform by the EU and other European and international actors, this Occasional Paper identifies a set of internal and external coordination challenges that hamper mission success. Internally, institutional constraints have meant that the coordination of EU instruments has been difficult to achieve. Member States, meanwhile, have until recently focused primarily on bilateral contributions to police and justice reform in the case of Germany and Italy, respectively, or on their military contributions to the International Security Assistance Force (ISAF). Externally, the resource gap and differing philosophies underlying police reform on the part of the US (the biggest contributor to police reform) and the EU have meant that coordination has been lacking, and existing coordination bodies unable to fulfil their tasks. Limited resources deployed in pursuit of police reform exacerbate these difficulties as inadequate commitments of political, material and personnel resources all too often translate into a loss of political influence at the strategic level. The paper therefore argues that only by improving coordination and by increasing resources and efforts at formulating and implementing joint strategies will the EU and its Member States have a positive impact on SSR in Afghanistan. Given the deteriorating conditions in the country, the upcoming presidential elections, and a renewed focus on Afghanistan on the part of the US administration, the EU and its Member States would do well to step up their efforts and their commitment to reforming Afghanistan’s police and justice system.