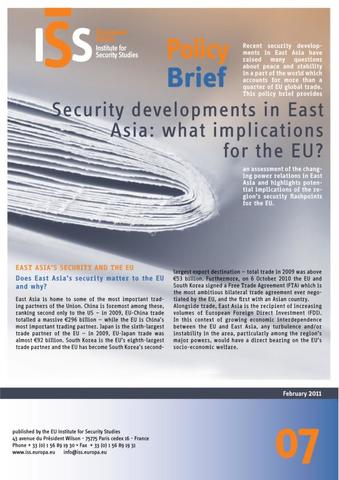 East Asia is home to some of the most important trading partners of the Union. China is foremost among these, ranking second only to the US – in 2009, EU-China trade totalled a massive €296 billion – while the EU is China’s most important trading partner. Japan is the sixth-largest trade partner of the EU – in 2009, EU-Japan trade was almost €92 billion. South Korea is the EU’s eighth-largest trade partner and the EU has become South Korea’s second largest export destination – total trade in 2009 was above €53 billion. Furthermore, on 6 October2010 the EU and South Korea signed a Free Trade Agreement (FTA) which is the most ambitious bilateral trade agreement ever negotiated by the EU, and the first with an Asian country. Alongside trade, East Asia is the recipient of increasing volumes of European Foreign Direct Investment (FDI). In this context of growing economic interdependence between the EU and East Asia, any turbulence and/or instability in the area, particularly among the region’s major powers, would have a direct bearing on the EU’s socio-economic welfare.