Sanctions against Iran: the role of pivotal rising powers 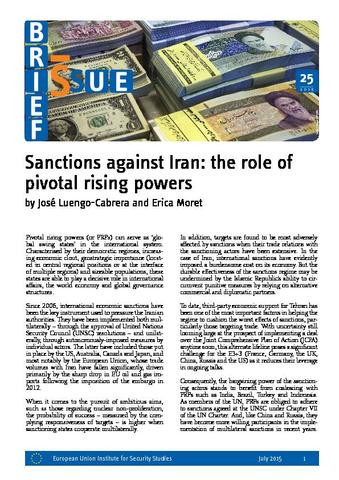 Pivotal rising powers (or PRPs) can serve as ‘global swing states’ in the international system. Characterised by their democratic regimes, increasing economic clout, geostrategic importance (located in central regional positions or at the interface of multiple regions) and sizeable populations, these states are able to play a decisive role in international affairs, the world economy and global governance structures. Since 2006, international economic sanctions have been the key instrument used to pressure the Iranian authorities. They have been implemented both multilaterally – through the approval of United Nations Security Council (UNSC) resolutions – and unilaterally, through autonomously-imposed measures by individual actors. The latter have included those put in place by the US, Australia, Canada and Japan, and most notably by the European Union, whose trade volumes with Iran have fallen significantly, driven primarily by the sharp drop in EU oil and gas imports following the imposition of the embargo in 2012.