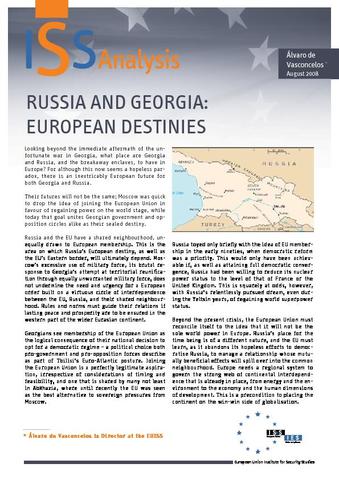 Looking ahead beyond the foretold and all the more absurd sad wars in Georga ,is it possible to discern the European future of Georgia and Russia, and with it that of the breakaway enclaves, now opposing both countries? For surely, though this now seems a hopeless paradox, there is an inextricably European future for both Georgia and Russia. Their fate is not the same, for Moscow was quick to drop the idea of joining the European Union with which it briefly toyed in the early nineties, and which today&nbsp; unites Georgian government and opposition circles alike as their sealed destiny, and traded it for regaining great power status.
Russia and the European Union have a shared neighbourhood, unequally drawn to European membership. This is the area on which Russia’s European destiny, as well as the EU’s Eastern border, will ultimately depend. Moscow’s use of excessive military force, its brutal response to Georgia’s attempt at territorial reunification through the equally unwarranted use of military force, does not call into question the need and the urgency for a European order&nbsp; built on a virtuous circle of interdependence between the EU, Russia, and their shared neighbourhood. Rules and norms must guide their relations, if lasting peace and prosperity are to be ensured in the western tip of the vaster Eurasian continent.
Georgians see membership in the European Union as the logical consequence of their national option for a democratic regime, a political choice pro-government and pro-opposition forces describe as part of Tbilisi’s Euro-Atlantic posture. Joining the European Union is a perfectly legitimate aspiration, irrespective of considerations of timing and feasibility, and one that is shared by many at least in Abkhazia where until recently the EU was seen as the best alternative to sovereign pressures namely from Moscow..&nbsp;
Russia toyed only briefly with the idea of EU membership at the beginning of the nineties, when democratic reform was a priority. This would only be an achievable goal, other than requiring full democratic convergence, should Russia be willing to accept to shrink down to France or Britain’s nuclear power status. This was definitely at odds, however, with the relentlessly pursued dream, even during Yeltsin’s years, of regaining world superpower status.
Beyond the present crisis, the European Union must reconcile itself with the idea that it will not be the sole world power in Europe. Russia’s place is for the time being of a different nature, and the EU must learn, as it abandons hopeless efforts at democratizing Russia, to manage a relationship whose mutually beneficial effects will spill over into the common neighbourhood. Europe needs a regional system governing the strong web of continental interdependence which is already in place, from energy and the environment to the economy and the human dimensions of development. This is a precondition to placing the continent on the win-win side of globalization.