Risks of the status quo 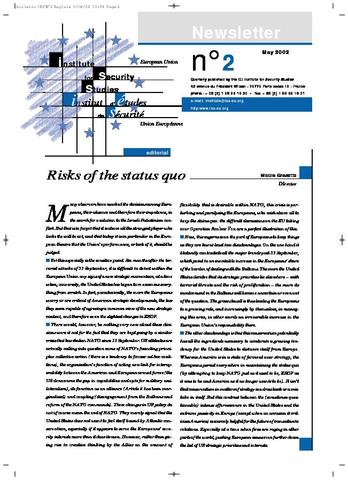 Many observers have mocked the divisions among Europeans, their absence and therefore their impotence, in the search for a solution to the Israeli-Palestinian conflict. But that is to forget that it is above all the strongest player who lacks the will to act, and that today it is in particular in the European theatre that the Union’s performance, or lack of it, should be judged.  Yet this especially is the sensitive point. Six months after the terrorist attacks of 11 September, it is difficult to detect within the European Union any signs of a new strategic momentum, at a time when, conversely, the United States has begun to re-examine everything from scratch. In fact, paradoxically, the more the Europeans worry or are critical of American strategic developments, the less they seem capable of agreeing a common view of the new strategic context, and therefore even the slightest changes to ESDP. There would, however, be nothing very new about these divisions were it not for the fact that they are kept going by a similar crisis that has shaken NATO since 11 September. US attitudes are actually calling into question some of NATO’s founding principles: collective action (there is a tendency to favour ad hoc coalitions), the organisation’s function of acting as a link for interoperability between the American and European armed forces.

Other articles in this issue: Crisis in Moldova
by Dov Lynch Paying for EU crisis management
by Antonio Missiroli