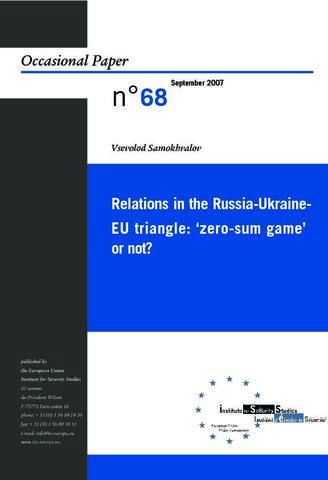 By introducing the Wider Europe concept and the European Neighborhood Policy, the European Union has actually entered a region which Russia has long considered the sphere of its national interests. Despite the fact that both Moscow and Brussels have repeatedly stated that their respective regional projects in the Post-Soviet Space are not competitors, the steady Euro-Atlantic integration of Ukraine since the Orange Revolution of 2004 has been accompanied by increasing tension in Russian-Ukrainian relations. The present Occasional Paper, which analyses the geoeconomic, geopolitical and socio-cultural dimensions of relations in the Russia-EU-Ukraine triangle, suggests that these relations represent a kind of ‘zero-sum game’. Regardless of the fact that Russia and the EU would like to avoid any clash in the Wider Europe, both sides have been pursuing their own strategies with the same goal in mind – shaping the Post-Soviet Space (PSS) according to their vision. Guided by these diverging visions for the PSS, it seems likely that Moscow and Brussels will seek to achieve different objectives, eventually reaching the point where their strategies and methods will generate tensions or even serious problems in their bilateral relations. Ukraine’s European project as it is currently evolving with the support of Brussels tends to undermine the main components of Moscow’s regional project for the PSS. As Kyiv tries to speed up its European trajectory without becoming overtly hostile to Moscow, it is weakening or even directly jeopardising the Russia-led political, social and economic structures based on the bonds that linked the states of the former Soviet Union – the common industrial complex, intertwined political developments and the single cultural space. Therefore, as a matter of urgency the EU needs to think over its foreign policies in the Eastern Neighbourhood with great care, bearing in mind their impact on relations with Russia, as well as Moscow’s possible response.