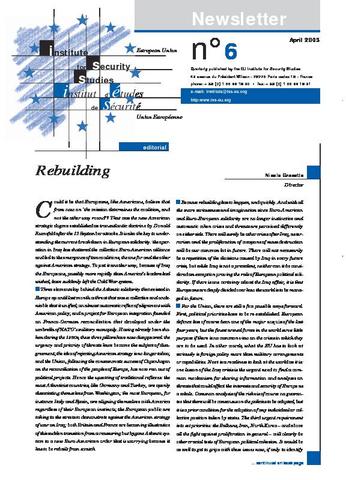 Could it be that Europeans, like Americans, believe that from now on ‘the mission determines the coalition, and not the other way round’? That was the new American strategic dogma established as transatlantic doctrine by Donald Rumsfeld after the 11 September attacks. It is also the key to understanding the current breakdown in European solidarity: the operation in Iraq has shattered the collective Euro-American alliance and led to the emergence of two coalitions, the one for and the other against American strategy. To put it another way, because of Iraq the Europeans, possibly more rapidly than America’s leaders had wished, have suddenly left the Cold War system. Three elements lay behind the Atlantic solidarity that existed in Europe up until last month: a threat that was so collective and undeniable that it unified; an almost automatic reflex of alignment with American policy; and a project for European integration founded on Franco-German reconciliation that developed under the umbrella of NATO’s military monopoly. Having already been shaken during the 1990s, these three pillars have now disappeared: the urgency and priority of threats have become the subject of disagreement; the idea of rejecting American strategy is no longer taboo; and the Union, following the consummate success of Copenhagen on the reconciliation of the peoples of Europe, has now run out of political projects. Hence the upsetting of traditional reflexes: the most Atlanticist countries, like Germany and Turkey, are openly dissociating themselves from Washington; the most European.

The United Nations must be given a chance