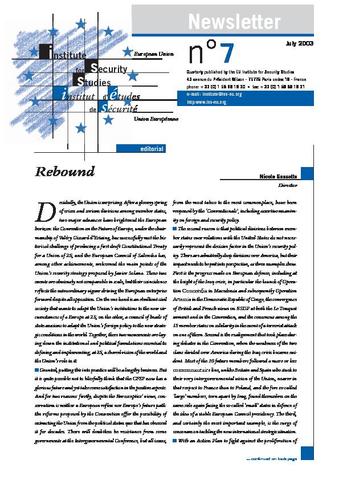 Decidedly, the Union is surprising. After a gloomy spring of crises and serious divisions among member states, two major advances have brightened the European horizon: the Convention on the Future of Europe, under the chairmanship of Valéry Giscard d’Estaing, has successfully met the historical challenge of producing a first draft Constitutional Treaty for a Union of 25; and the European Council of Salonika has, among other achievements, welcomed the main points of the Union’s security strategy proposed by Javier Solana. These two events are obviously not comparable in scale, but their coincidence reflects the extraordinary vigour driving the European enterprise forward despite all opposition. On the one hand is an ebullient civil society that wants to adapt the Union’s institutions to the new circumstances of a Europe at 25; on the other, a council of heads of state anxious to adapt the Union’s foreign policy to the new strategic conditions in the world. Together, these two movements are laying down the institutional and political foundations essential to defining and implementing, at 25, a shared vision of the world and the Union’s role in it.
Granted, putting this into practice will be a lengthy business. But it is quite possible not to blissfully think that the CFSP now has a glorious future and yet take some satisfaction in the positive aspects. And for two reasons: firstly, despite the Eurosceptics’ views, conservatism is neither a European reflex nor Europe’s future path: the reforms proposed by the Convention offer the possibility of (...)