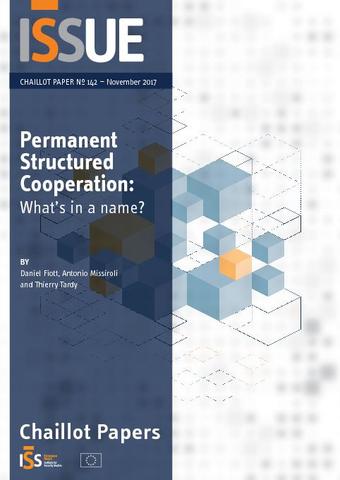 Permanent Structured Cooperation (PeSCo), the so-called ‘sleeping beauty’ of EU defence, is awake. Still barely predictable only a year ago, PeSCo is an ambitious, binding and inclusive legal framework aimed at incentivising defence cooperation among member states. PeSCo is based on binding commitments between member states that could promote increased defence spending, improve force commitments for EU operations and stimulate European defence equipment programmes. In addition to the regular assessment of these commitments, PeSCo will also house a number of concrete projects designed to improve the effectiveness of EU military operations and to sustain European capability development. Taken together, these elements are designed to potentially shape national mindsets and practices in defence through a structured framework at the EU level.

Elaborating on the likely form and extent of PeSCo, this Chaillot Paper not only sketches out the historical metamorphosis of PeSCo but it also looks more specifically at how it could change the operational and capability development dynamics of EU defence cooperation. The paper is not primarily occupied with questions about its finalité politique, but it is rather an analytical guide to assist experts and lay readers alike navigate the major operational and capability issues at stake.