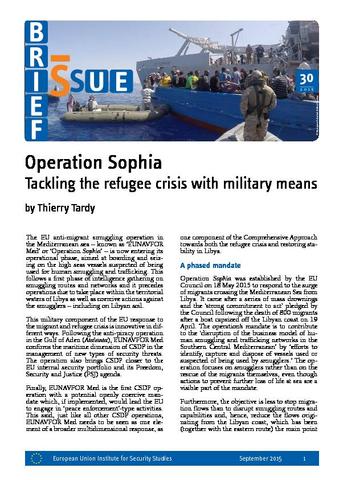 The EU anti-migrant smuggling operation in the Mediterranean sea – known as ‘EUNAVFOR Med’ or ‘Operation Sophia’ – is now entering its operational phase, aimed at boarding and seizing on the high seas vessels suspected of being used for human smuggling and trafficking. This follows a first phase of intelligence gathering on smuggling routes and networks and is intended to precede operations due to take place within the territorial waters of Libya as well as coercive actions against the smugglers – including on Libyan soil. This military component of the EU response to the migrant and refugee crisis is innovative in different ways. Following the anti-piracy operation in the Gulf of Aden (Atalanta), EUNAVFOR Med confirms the maritime dimension of CSDP in the management of new types of security threats. The operation also brings CSDP closer to the EU internal security portfolio and its Freedom, Security and Justice (FSJ) agenda. Finally, EUNAVFOR Med is the first CSDP operation with a potential openly coercive mandate which, if implemented, would lead the EU to engage in ‘peace enforcement’-type activities. This said, just like all other CSDP operations, EUNAVFOR Med needs to be seen as one element of a broader multidimensional response, as one component of the Comprehensive Approach towards both the refugee crisis and restoring stability in Libya.