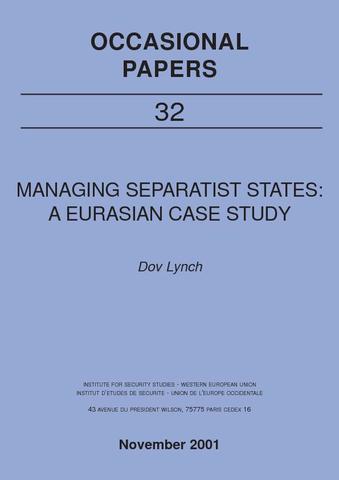 In addition to the fifteen states that emerged from the Soviet collapse in 1992, four other states exist and have declared independence, but are unrecognised. These are the Pridnestrovyan Moldovan Republic (PMR) inside Moldovan borders, the Republic of South Ossetia and the Republic of Abkhazia within Georgian borders, and the Nagorno-Karabakh Republic in Azerbaijan. These separatist states are not found on any map of the former Soviet Union, and are completely isolated in international relations. They have been largely forgotten in studies of security in the former Soviet Union. Since 1992, cease-fires have been reached, but there has been no progress towards settlement.
This <i>Occasional Paper</i> examines the role played by the separatist states in blocking conflict settlement. The analysis focuses on the internal and external dynamics driving the continuing existence of the separatist areas.
The argument is divided into three sections. The first part examines the forces that drive the separatist states with a view to understanding why conflict settlement has been difficult. The discussion focuses on the political, military and economic logic that underpins the states at the internal and external levels. This logic has entrenched their existence for the last decade. The second part discuses the security impact of the separatist states on regional and international security. The impact has not only been negative, in terms of armed conflict and organised crime, but also positive. Finally, the paper explores ways out of the current volatile impasse. The analysis examines the approaches taken thus far by the international community, and proposes an alternative that may help to break the inertia of a decade of entrenched conflict. In seeking to balance the norm of territorial integrity with the right to self-determination, this alternative strategy may have relevance to other conflicts which present a similar problem of separatist states, such as in former Yugoslavia
What may be done to break the inertia of the status quo? Current reality must be the starting point for managing the separatist states. What matters most is 2002, less 1992. Any movement towards settlement will have to take into account the logic working behind the conflicts and these states. Settlement proposals will have to focus on the structures that have developed over the past decade. The paper discusses the strategies that have been adopted so far by the international community towards the separatist states. Until now, the inconsistency in international approaches has only served to entrench those states. A more coordinated strategy that seeks a median line between the extremes of recognition and elimination of the separatist states may help reverse the logic driving these states. The key objective should be to make the policies of the international community more consistent and more appropriate to the reality that has emerged on the ground. Without a coherent and realistic wider strategy, negotiations will continue to fail.
The wider strategy should address five policy lines: (1) a determined status for these areas while they remain de jure within the former central states; (2) a sequenced return path for refugees; (3) the importance of security and deterrence in the conflict zones; (4) multi-dimensional confidence-building measures; and (5) economic assistance for postwar reconstruction. All of these policy lines are already present in international approaches. However, they have been applied inconsistently by different organisations and states, and unevenly across the region. The lack of coordination has only entrenched the status quo. A coordinated international policy will produce more than simply synergy of effort. It may help to break the inertia of the current status quo, and initiate a new logic on the ground.
It is imperative that Europe and the international community undertake a proactive search to manage the separatist states. A stable, if perverse, logic has emerged which means that things do not necessarily have to change. The separatist states and Moldova, Georgia and Azerbaijan can survive in current conditions. Without significant changes, they will remain a feature of the post-Soviet space in 2012. In this case, however, far from becoming a strategic asset on Europe’s periphery, the former Soviet Union may be confirmed as a zone of strategic threat, radiating instability externally and collapsing internally.