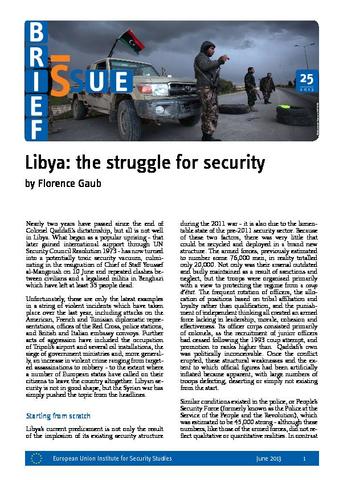 Nearly two years have passed since the end of Colonel Qaddafi’s dictatorship, but all is not well in Libya. What began as a popular uprising - that later gained international support through UN Security Council Resolution 1973 - has now turned into a potentially toxic security vacuum. Acts of aggression have included the occupation of Tripoli’s airport and several oil installations, the siege of government ministries and, more generally, an increase in violent crime ranging from targeted assassinations to robbery - to the extent where a number of European states have called on their citizens to leave the country altogether.

Libyan security is not in good shape, but the Syrian war has simply pushed the topic from the headlines.