Libya: getting it right 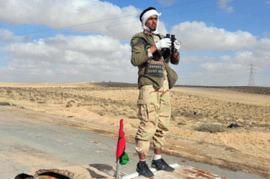 As the 42-year dictatorship in Libya nears its end, it is important we get it right in dealing with the post-Gaddafi era as the process moves, in all likelihood, from military confrontation to democratic transition. A democratic Libya is an important new driving force in the Arab democratic wave. It builds on the growing momentum created by the Tunisian and Egyptian revolutions, making it increasingly more difficult for authoritarian leaders in North Africa and the Middle East to sustain their policies. With hope, Bashar Assad realises this. The international community, and in particular the European Union, can, and must, play an important role in supporting a democratic outcome in accordance with the expressed desires of the Libyan people. There are several areas where the international community and Europe can play an important role in supporting the Libyan transition.

First and foremost, they need to continue supporting the anti-Gaddafi forces in their struggle to end the military confrontation and help guarantee security and peace throughout Libya — a number of pro-Gaddafi forces are still in control of a few strategically important areas, in particular the city of Sirte, Gaddafi's home town, where he may well be hiding . Pro-Gaddafi forces have been using Sirte to launch missiles attacks (notably Scuds) against Misrata in a last attempt to kill as many civilians as possible. This suggests that NATO's operations in protecting civilians is not yet over.

Second, the NATO members involved in Operation Unified Protector must be respectful of the aspirations of the Libyan people and recognise that their liberation from a ruthless dictator was fundamentally the result of the determined fighting of the Libyan opposition forces. This is important in avoiding the perception of the conflict as being another foreign military intervention into an Arab state, similar to Afghanistan or Iraq — examples perceived by many in non-Western countries, as well as many in the West, of what not to do. Of course it must also be recognised that NATO military action was essential in implementing UN Security Council Resolution 1973, which is based on the principle of the responsibility to protect (R2P).

Third, Europe must work toward unifying all of the opposition forces, as they are particularly diverse. This is crucial in avoiding a situation where the EU becomes associated with one group of the opposition over another, in particular with those in Cyrenaica and Benghazi. We must take into account that Gaddafi's regime was defeated not only by opposition forces from Cyrenaica, with its centre in Benghazi, but also by opposition fighters from Tripolitania — a case in point being the heroic defence of Misrata, Tripolitania's second city, as well as the push on Tripoli by opposition fighters from the Jabel mountains to the west of Tripoli. We must also fundamentally accept that it is up to the Libyans to decide who will be running the country in the future. No external forces should be picking and choosing who the good guys and the bad guys are. This will become a particularly thorny issue when it comes to the inevitable, but necessary, acceptance that the Islamists were an important part of the military struggle against Gaddafi and will be important actors in Libya's transition and in its democratic future.

Fourth, it is up to the Libyans to decide what assistance and support they need. The European Union must be prepared for all eventualities, from a civilian to a military mission, from technical assistance in the reconstruction of the oil industry to cooperation in the education and health sector. And when the Nato mission wraps up, Europe may need to provide technical support and training to the Libyan security forces, police and military. Europe should coordinate such efforts with Turkey and the Arab League.

Getting it right in Libya is crucial in supporting the democratic future of our neighbours and the objective of creating a Euro-Mediterranean community of democracies.