A lasting peace in Central Europe? 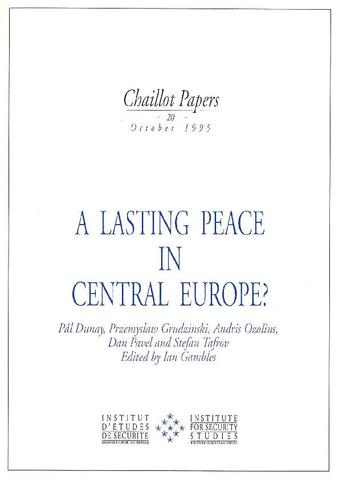 Forty years ago, Karl Deutsch claimed that the North Atlantic area, Western Europe and North America, had developed a long way towards becoming a `security-community', and put forward policy proposals designed to continue and strengthen the process of development. That security-community has proved itself strong and lasting, a guarantor of peace in Western Europe. This study is about extending that community eastwards, and makes the claim that a lasting peace is already beginning to be consolidated in the area of Central and East European that was under Soviet domination during the Cold War. What is a security-community? Deutsch defined it as a community `in which there is real assurance that the members of that community will not fight each other physically, but will settle their disputes in some other way.' He distinguished between `amalgamated' security-communities, states or other political units with a supreme centre of decision-making, and `pluralistic' security-communities, comprising separate governmental units; it is the latter type that has developed so effectively in the North Atlantic area. The exclusion of the use of force between the states of a security-community must be not just a matter of political declaration and international law, but a real and firmly established change in the conduct of their international relations. There is no necessary connection, either in the North Atlantic area or elsewhere, between a security-community and an international institution, treaty, or alliance. A security-community cannot be created by fiats or secretariats, nor can it be sustained by promises alone.

Turkey and the EU: strategic implications for Central Europe