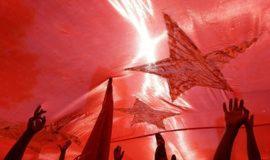 After a decade of accentuating collective leadership, harmony and what many foreign observers have taken to call the ‘black box’ approach of top level Chinese decision-making, this year of succession is proving interesting – one might even go as far as to claim that a break in the politics and history is about to occur in China.

It is true that there is a risk that developments inside the Chinese Communist Party (CCP) leadership could be subject to over-interpretation. Silence on important issues – and none have been as glaring as the disappearance from public of China’s presumed next leader, Xi Jinping, for two weeks – only creates a rumour mill. It is now as if an ‘echo box’ in society at large is beginning to balance out the ‘black box’ of insider elite politics. The universal spread of social media – with even striking workers and local activists now making regular of use it – is changing both public opinion and the terms in which politics is conducted inside China. A process of asymmetric political liberalisation over the past two decades – with nationalist activists having been tolerated while democracy activists are still being repressed – means that the influence of nationalist thinking on the population at large may be open to exaggeration.

In addition to politics there are other factors in play. China’s outgoing leaders, the Hu-Wen tandem, deserve praise for the extraordinary success they have achieved on the economic front, and in positioning China as a now indispensable international actor. Climbing to become the world’s second largest economy (third if one counts the EU as a single unit), and maintaining economic momentum in the face of a series of international crises, are no mean feats. Yet the outgoing leaders are very often criticised in China for their timidity or ambiguity in addressing some of the more pressing issues. This criticism comes from both the ‘left’ - nationalist or populist advocates of a stronger state - and also from the ‘right’ - liberals and constitutionalists who want to speed up the process of legal, political and economic reform.

There is a growing realisation that success of the current system may be reaching its own limits. China’s export-oriented economy, its financial repression leading to the world’s largest stock of foreign currency reserves, and the rise of state-led industrial giants and special interests groups such as finance and real estate lobbies have now begun to stunt further growth. The later the causes of this slowdown are tackled, the harder they will be to fix in the long run.

At the same time there is also a growing expectations gap in China. China’s nationalists do not see why the country – with its new international leverage and ever-rising military budget - cannot achieve its historical irredentist goals and reclaim lost territories. This expectation gap explains the quasi-simultaneous clashes which have recurred in the summer of 2012 with the Philippines and Japan. “China is a big country”, the Foreign Minister of the People’s Republic of China (PRC), Yang Jiechi, said euphemistically to a gathering of his ASEAN counterparts in July 2010. Since then, China has proceeded to prove this claim, demonstrating force in both the South and East China Seas.

The crisis of expectations is also becoming evident in the socioeconomic field. After several decades of stagnation, real industrial wages in China have started rising, first in 2008 and again since 2011. Factors for this have included: local labour shortages, an investment boom complementing the export boom, and the decision by higher authorities to let industrial developments take their course, particularly in factories belonging to big foreign companies.

Yet the steeply rising cost of food, housing and lodging, which in reality is far beyond China’s official price indexes, is cancelling out much of these wage increases. As a result, income gaps and inequality are becoming more evident, and indeed more commented on. Furthermore, studies on  ‘grey’ or undeclared income - demonstrating that China’s GDP is underestimated by perhaps 15%, and that untaxed or ‘hidden’ income is almost entirely concentrated in rich urban households (the top 2% of China’s population) – are also helping to reveal that China’s low ratio of individual income to GDP is in fact a myth. Indeed there are two Chinas: a China of rural and contract workers which is still expanding in the hinterland and is the source of industrial competitiveness abroad; and a China of new higher middle classes who live off the transactional economy and, more often than not, profit economically from a privileged status, tax exemptions (prevalent in real estate) and also corruption or rent-seeking.

It is these developments that explain why the political succession is happening in a climate that combines a glowing sense of achievement with a gnawing feeling of insecurity. The difficulties inherent in the process rebalancing power whilst at the same time creating ‘checks without balances’ inside the single-party state are coming to a head at this time of political succession.

There are more questions than answers on several of the difficulties that China is now facing, even if these difficulties are of its own doing rather than the consequences of international trends. There is currently three main issues primarily influencing the political climate in the PRC as we approach the leadership transition:

-        The conflict between advocates of the rule of law and the actions of the security and propaganda apparatus is now glaringly obvious. Prime Minister Wen Jiabao has repeatedly addressed the issue, supporting the reformers and suggesting that the tranisiton should speed up and become a top-down process. He has also made his position clear by explicitly stating that ‘absolutely no one is above the law’ and by warning of the risk of a recurring Cultural Revolution. Meanwhile, cases such as the detention of Ai Weiwei in 2011 or the Chen Guangcheng saga in 2012 have drawn worldwide attention to the very powerful, if somewhat arbitrary nature of the Chinese security apparatus. In 2011-2012, the public debate over a new criminal procedural code exposed a conflict between advocates of the rule of law and due process, and those who stood, among other things, for arbitrary and secret detention for a variety of crimes. Despite this fact, one should be careful not to demonise China. There are several states in South-East Asia which can be categorised as semi-democratic, or indeed semi-authoritarian, that have kept provisions in domestic security legation to allow for arbitrary detention. That said, however, nowhere is the detention process as secret as in China. Following the persecution of Ai Weiwei and Chen Guangcheng, the fate of a Politburo member and some of his close associates serves as a reminder as to the limits of the rule of law in the Chinese state. Amongst the top leadership or influential party elders it is difficult to identify where each individual stands on this issue. It is clear, however, that opposing camps have already begun to form.

-      The debate between those who argue for continued state-led economic growth and those who advocate the need for liberalising reforms that place regulation over administration, has also adopted strong political overtones. There are now clear battle lines being drawn between the old guard and those who believe in curtailing the growth of state firms, infrastructure and investment in favour of smaller private firms, entrepreneurial innovation and individual demands. On one hand, the World Bank’s ‘China 2030’ report, publicly endorsed by a State Council think-tank, prescribes further steps towards economic reform. On the other hand, the Chongqing model of huge public investment to help draw in Chinese and foreign firms, along with larger social expenditures, suggests an alternative future where the success of an essentially non-market economy lies in its capacity to control and mobilise the factors of production; it is socialism writ large in the era of globalisation. The debate is further complicated by the fact that advocates of China’s reform also have a comprehensive plan to introduce social welfare (including health insurance and retirement pensions) to the very bottom rungs of Chinese society – right down to the rural household families who have never been directly provided for by the central state. While China’s populists and ‘new left’ accuses liberal policies of fostering income inequity and graft, the liberals counter that it is the unfinished process of reform and transition that has encouraged rent-seeking and corruption.

-       Foreign policy has become a minefield since late 2009. This is perhaps the most surprising development of all, since foreign policy and security are, in general, the most tightly controlled sectors of public life in China. An explanation is often put forward by officials or experts, that the new generation of Chinese citizens is increasingly vocal and patriotic. The liberalisation of public and social media has fanned the flames of active nationalism, exercising pressure on the actions of the government. This may be more of a self-fulfilling prophecy than an actual explanation of what is going on. China’s ideologically biased education system and tightly controlled media have encouraged the spread of patriotism and nationalism since the early 1990s to counteract the Westernising and democratising element in China’s society. Key institutions of the one-party state – from the People’s Daily group to some defence institutions – are a party to this wave of nationalism. The real issue is whether these developments are the consequence of a genuine, top-down plan to promote nationalism as an ideological bulwark and a foreign policy tool, or whether there are also conflicting views among the many bureaucracies that craft the foreign policy of country with big power status. Disputes – with ASEAN members or with Japan – seem to be cyclical in nature, which would suggest an alternation between periods of control and periods of purposefully encouraged tensions. Two factors still curb a serious escalation in violence: China’s use of hard power military means is extremely, if not totally, limited – with all incidents involving at the most semi-militarised organisations such as coastguards that are unlikely to lead to a spiral of escalation (some encounters between Chinese submarines and the US Pacific Fleet are the exception to this, but they are not directly linked to territorial disputes). More generally, China’s foreign policy is able to preserve a status of moderation and reform, of which policies towards the European Union and global financial organisations are key examples.

It should also be noted that positive developments and reforms still continue in some sectors that seem to be insulated from the general upheaval of this succession year. China’s developments in the field of alternative energies is impressive, even if it can also be construed as a niche market for exports and involves questions about fair competition. The development of the Chinese financial market and a limited experiment in the internationalisation of the renminbi (RMB) also continue to advance.

Perhaps the hardest aspect of all in this year of succession is how to gauge accurately the importance of the personal, factional or political debates that are taking place, and to put them in perspective of a semi-institutionalised process operating on a large scale. A thousand plus delegates to the Party Congress have been selected, with a slightly improved ratio of candidates to posts. There is, so far, no reason to think that the Party Congress will be delayed beyond the five-year term prescribed by the Party Constitution. However, we should remember that in 2002, a state visit by Jiang Zemin to the United States was informally used as a justification to push back the same Party congress by a month, beyond the five year limit. Something similar may occur once more.