Iran and the Shia of Iraq 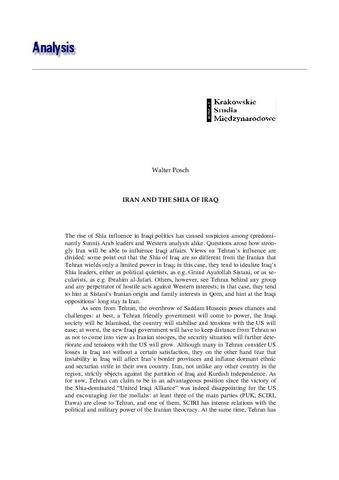 The rise of Shia influence in Iraqi politics has caused suspicion among (predominantly Sunni) Arab leaders and Western analysts alike. Questions arose how strongly Iran will be able to influence Iraqi affairs. Views on Tehran's influence are divided: some point out that the Shia of Iraq are so different from the Iranian that Tehran wields only a limited power in Iraq; in this case, they tend to idealize Iraq's Shia leaders, either as political quietists, as e.g. Grand Ayatollah Sistani, or as secularists, as e.g. Ibrahim al-Jafari. Others, however, see Tehran behind any group and any perpetrator of hostile acts against Western interests; in that case, they tend to hint at Sistani's Iranian origin and family interests in Qom, and hint at the Iraqi oppositions' long stay in Iran.<br /><br />